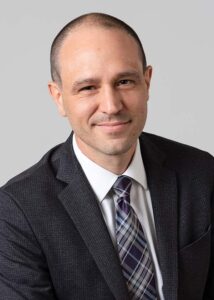 Stark & Stark is proud to announce that Shareholder Domenic Sanginiti was presented with the American Association for Justice (AAJ) Distinguished Service Award during the Board of Governors Meeting on July 20th in Seattle, WA. This award recognizes members of the AAJ Board of Governors who during the past year have been of special assistance to the president of the organization.

“I am appreciative to be a recipient of the Distinguished Service Award,” said Domenic. “I am grateful to our immediate past president, Navan Ward, for the opportunity to assist him with his goals during his presidency of the American Association for Justice.”

Domenic is a member of Stark & Stark’s Accident & Personal Injury group. He focuses his practice on representing people who have suffered spinal cord injuries, and other catastrophic injuries, including death, resulting from motorcycle crashes, automobile crashes, premises liability, and product liability.