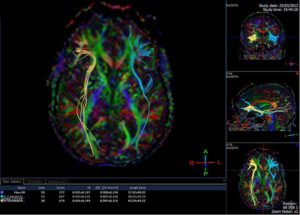 “This computer generated image is called DTI (diffusion tensor imaging) color map of the brain. In neuroscience, the tractography is a 3D modeling technique used to visually represent neural tract using data collected by DTI (a special MRI method).The tractography used special technique of MRI, and computer based image analysis. The results are represented in two and three-dimensional images.This technology has been used to evaluate the white matter connectivity of the brain.”

If you’ve suffered a mild traumatic brain injury (mild TBI) as the result of an accident, you may be required to provide evidence of this injury in order to collect the insurance payments needed for medical care or pursue the compensation you’re entitled to through personal injury lawsuits.

DTI and the Frye standard

In both of the following cases, DTI was found to be admissible according to the Frye standard, setting a stronger precedent for its use in Frye standard states moving forward.

In 2018, a plaintiff who was injured in a motor vehicle accident underwent an MRI with diffusion tensor imaging. This MRI was interpreted by Michael Lipton, M.D., who concluded that the plaintiff had suffered a mild TBI.

The plaintiff then submitted significant evidence in support of DTI’s general acceptance, including several peer-reviewed articles, previous court decisions, and affirmations from board-certified physicians who regularly used DTI as part of their practice. They also noted DTI’s FDA approval and its common usage in hospitals throughout the country.

The defendant responded by arguing that DTI is not generally accepted and submitted evidence including articles disputing its reliability.

The New York court decided that the plaintiff had presented sufficient evidence and that the DTI results were admissible under the Frye standard. As a result, the defendant couldn’t dispute that DTI itself was a generally accepted practice, although they were still free to dispute its use in this particular case.

In a more recent case from November of this year, a defendant in Illinois moved to bar testimony from the plaintiff’s neuroradiologist, Dr. Ammar Chaudhry. Specifically, the defendant argued that Dr. Chaudhry’s interpretation of advanced MRI sequences including DTI should not be admissible in court.

However, the court denied the defendant’s motion after finding that DTI was admissible under the Frye standard in addition to Illinois state law. As such, the testimony regarding the DTI findings was deemed admissible.

Both of these recent rulings uphold the use of DTI in court and will hopefully make it easier for individuals with traumatic brain injuries to pursue the compensation they’re entitled to. However, it’s still important to work with an experienced attorney if you’ve been injured and need to seek compensation.

The traumatic brain injury lawyers at Stark and Stark have the experience and specialized knowledge needed to handle cases involving mild or severe TBI. If you’ve suffered a traumatic brain injury in an accident and need legal advice or representation, contact us. We can help to guide you through the next steps and fight for the compensation you’re entitled to.