Shareholder Joseph Lemkin of Stark & Stark presented the Raphael Lemkin Engaged Scholarship Award at the Rutgers Center for the Study of Genocide and Human Rights on December 5. The award was presented to Dr. Robert Jay Lifton. 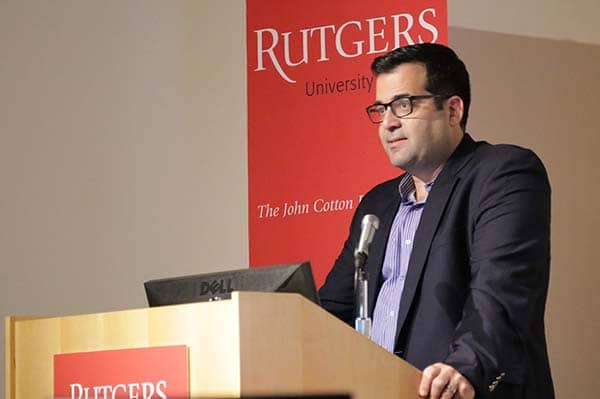 Joe Lemkin is a Shareholder at Stark & Stark and a member of the firm’s Bankruptcy & Creditors’ Rights Group. Joe’s practice primarily focuses on the areas of bankruptcy law, commercial litigation, business reorganization, and related matters, with a particular emphasis on creditors’ rights. He is also an active alumnus of Rutgers University, and is currently the Vice Chair of the Rutgers University Alumni Association and the Development Board Chair of the Rutgers Center for the Study of Genocide and Human Rights.

The Rutgers Center for the Study of Genocide and Human Rights seeks (CGHR) “to enhance our understanding of mass human rights violations and the principles and mechanisms meant to prevent them, protect the vulnerable, and help victims recover.” The Center’s mission is to “understand and prevent genocide and mass atrocity crimes.” The CGHR hosted the inaugural Raphael Lemkin Engaged Scholar Award and Lecture to coincide with the anniversary week of December 9, 1948, which was the date of the U.N. Genocide Convention and the International Day for Commemoration and Dignity of the Victims of the Crime of Genocide.

The award is named in honor of Raphael Lemkin, who was an attorney who first coined the term “genocide,” and successfully pushed to have the term recognized and criminalized in international law. During his life, Raphael went on to teach at Rutgers University as a law professor. Raphael Lemkin is also Joe’s father’s cousin.

“I’m delighted Raphael’s work increasingly receives the attention that it deserves,” said Joe Lemkin at the award ceremony. “His work on the history of genocide must never be forgotten.”

The award was presented to Dr. Robert Jay Lifton, who is a Lecturer in Psychiatry at Columbia University and Distinguished Professor Emeritus of Psychiatry and Psychology at the City University of New York. He has taken an active part in the formation of the new field of psychohistory and has long been recognized as a leading public intellectual. In recent decades, Dr. Lifton has done psychological and historical research on apocalyptic violence, including apocalyptic tendencies after 9/11, and climate change.