A message from Stark & Stark regarding COVID-19 (Coronavirus): CLICK HERE for more information. 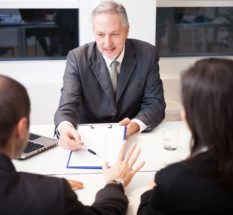 Divorce Arbitration is an effective method of dispute resolution that is recognized by the New Jersey Supreme Court as an alternative to conventional divorce litigation.

As a child, you might have experienced your parents going through a divorce, or watched a friend struggle through it. In the past, traditional fault divorce was generally the only recourse and frequently turned into a messy affair. People fought, emotions flared, children suffered, and finances collapsed.

Now, you’re the one facing a divorce. But, as much as possible, you want to avoid the drama, the heartache, the loss of control over life decisions, and the potentially huge expense – all while safeguarding your children’s wellbeing. If those goals sound ideal to you, Divorce Arbitration may be the solution.

With Divorce Arbitration, the parties agree on the dates the arbitration will take place and are not at the mercy of the court system, which may schedule court dates that span a long period of time. A typical courtroom divorce does not take place over consecutive days or even consecutive weeks. In our overburdened court system, divorce cases are often heard in piecemeal blocks of time over different dates. So, if your divorce case starts on June 1, it may be heard for a couple of hours and then adjourned to July 10, then heard for a few more hours, and adjourned again to September 25. This process can go on for weeks or months, requiring you to take multiple days off from work to adhere to the court’s schedule. Then, once you reach the back end of the courtroom process, you must still wait for the judge to render his decision.

With Divorce Arbitration, there are fewer work days lost for hearings and a speedier resolution overall. In the Divorce Arbitration process, you participate in the scheduling of your sessions. You can schedule sessions around your work schedule, family obligations, or your children’s schedules. Perhaps most importantly, Divorce Arbitration can take place for continuous hours on consecutive days so that it is generally more efficient and less time consuming than courtroom divorce, and results in fewer lost work days. Additionally, the arbitrator generally returns his or her decision within 30 days.

In some cases, Divorce Arbitration follows an unsuccessful mediation. Sometimes the issues are just too complicated in the divorcing couple’s eyes or their positions are too irreconcilable, making it impossible to reach a mediated agreement. In lieu of going to court, divorce arbitration may be a good alternative.

What Happens During Divorce Arbitration?

Divorce Arbitration is similar to litigation in some respects, and different in others. With Divorce Arbitration, the parties have more control over the process than they would have in a litigated divorce. Once Divorce Arbitration begins, the case proceeds with witnesses testifying and documents submitted to the arbitrator consistent with the rules of evidence, as in a trial – but the rules are applied in a manner agreed upon by the parties. At the conclusion of the hearing, the arbitrator advises the parties of a date for issuance of his or her decision, which depends upon the complexity of the issues involved. The goal of a divorce arbitrator is to render a decision within 30 days, if possible.

How Is the Divorce Arbitration Hearing Structured?

What Types of Issues May Be Arbitrated?

The parties and their attorneys determine the issues to be arbitrated in advance of the hearing, including whether to arbitrate related non-family law matters. A non-exclusive list of issues that the parties can choose to arbitrate include equitable distribution, pension issues, alimony, disposition of the marital home, custody of children, parenting time, and child support. If custody of children is involved, arbitration will result in a decision that is reviewable by the court due to New Jersey’s jurisdiction over the welfare of children within its borders.

How Do I Choose an Divorce Arbitrator?

The selection of an arbitrator is essential. My recommendation is to utilize a family law attorney who has been certified as a Divorce Arbitrator by the American Academy of Matrimonial Lawyers (AAML). A family law attorney with AAML certification will use his or her family law experience and knowledge to thoughtfully, thoroughly, and realistically decide the issues in your case. The selection is also critical as the arbitrator’s decision will generally be binding – but keep in mind that the parties can agree to an appeal process.

What Is the Difference Between Divorce Arbitration and Mediation?

Divorce Mediation involves the assistance of a neutral third party who encourages and facilitates a resolution of the issues in discussions by the parties, who reach an agreement that is incorporated into the divorce judgment. Arbitration is more accurately viewed as akin to litigation, but on an expedited basis and with more control over the process. Witnesses are called, documents admitted into evidence — and the rules of evidence are followed, to the extent agreed upon by the parties. Divorce Mediation results in an agreement reached by the parties – the mediator does not render a decision. An arbitrator listens to the testimony and considers the evidence before entering a formal decision on the parties’ various issues. Arbitration generally results in a binding decision, although the parties may agree in advance to an appeals process. The court will vacate an arbitration award only under limited circumstances, such as fraud, which are delineated by statute.

Can I Afford Divorce Arbitration?

The parties agree in advance as to whether one or both will advance the arbitrator’s fee. Divorce Arbitration is usually more affordable than a traditional litigated divorce, especially if any of the issues proceed to trial. Arbitration is generally faster than a typical courtroom divorce due to more flexible scheduling and more effective, efficient sessions. A faster resolution often saves money.

In summation, Divorce Arbitration offers an alternative to the “courthouse” experience, which can be time-consuming and difficult to endure. Presenting the case to a certified Divorce Arbitrator is a more time-sensitive approach that thoroughly addresses your particular issues as outlined prior to the arbitration with your input. Divorce Arbitration is also in the best interests of children who desire a return to a sense of normalcy and continuity in their everyday lives, and a certainty of their future.

Given the severe backlog in the New Jersey court system, and the difficulty obtaining hearing dates and timely decisions, more divorcing parties are turning to arbitration to resolve their disputes.